‘A Fine Day for Seeing’ takes its title from the New York School poet and curator Frank O’Hara, who bridged literary and artistic worlds in the late 1950s. In this spirit of collaboration between word and image, the exhibition presents ten pairs of internationally acclaimed contemporary poets and artists who have been invited to work together in dialogue.

The show is curated by Paul Carey-Kent, an art writer with a long standing interest in poetry, and Dr. Tamar Yoseloff, a poet with a strong engagement with visual art.

During your visit you can listen to the poems via QR code, please bring headphones with you. A small number of audio sets will be available at the gallery reception.

Listen to poets reading their poems //

Leo Boix ‘The Wall Built Between Argentina and Paraguay’

Khairani Barokka ‘fruit as a verb’

Poets and Artists in Dialogue: 21 August, 3–4:30pm. Booking essential
Join us for a panel discussion on creative alliances featuring three pairs of artist & poet collaborators from A Fine Day For Seeing

Book Poets and Artist in Dialogue via Eventbrite

A Fine Day for Seeing has been made possible with thanks to the generous support of Arts Council England, Poetry School and Southwark Council

Khairani Barokka is a Minang-Javanese writer and artist from Jakarta, whose work centres disability justice as anticolonial praxis. Her work has been presented widely, in over 15 countries, and work from her Annah, Infinite series of performance installations has been an Artforum Must-See. Among Okka’s honours, she was a UNFPA Indonesian Young Leader Driving Social Change, an NYU Tisch Departmental Fellow, and Modern Poetry in Translation’s Inaugural Poet-in-Residence. She is currently Associate Artist at the National Centre for Writing (UK), UK Art Associate at Delfina Foundation, and Research Fellow at UAL’s Decolonising Arts Institute. Barokka’s books include Indigenous Species  (Tilted Axis; Vietnamese translation, AJAR Press) and Stairs and Whispers: D/deaf and Disabled Poets Write Back (as co-editor; Nine Arches), Rope (Nine Arches), and her latest Ultimatum Orangutan (Nine Arches).

Leo Boix is an Argentinean journalist and poet based in London and Deal. He has published two collections in Spanish. His English poems have appeared in The Poetry Review, Poetry, MPT, The Rialto, Minor Literature[s] and elsewhere. He is a graduate of the The Complete Works III scheme. His first full collection is due from Chatto in 2021.

Annie Freud was named a Next Generation Poet in 2014. She is the daughter of painter Lucian Freud. Her first full collection, The Best Man That Ever Was, was a PBS Recommendation in 2007, and went on to receive the Glen Dimplex New Writers’ Award. Her second collection, The Mirabelles, was published by Picador in 2010 and was shortlisted for the TS Eliot Prize in 2011. Her third collection The Remains, was published in 2015.

Martha Kapos studied art at Chelsea and stayed on to teach there until 2001 when she became Assistant Poetry Editor of Poetry London. Her poems have appeared in Poetry Review, PN Review and the TLS. My Nights in Cupid’s Palace (Enitharmon, 2003) was a PBS Special Commendation and won the Jerwood/Aldeburgh Prize for Best First Collection. Her most recent collections, Supreme Being (Enitharmon, 2008) and The Likeness (Enitharmon 2014), were both PBS Recommendations.

Roy McFarlane was born in Birmingham of Jamaican parentage. He has been Birmingham’s Poet Laureate, Starbucks’ Poet in Residence, and the Birmingham & Midland Institute’s Poet in Residence. His first collection, Beginning with Your Last Breath was published by Nine Arches Press in 2016, and was followed by The Healing Next Time in 2018, which was a PBS Recommendation, a Guardian Poetry Book of the Year and was shortlisted for the Ted Hughes Award.

Maitreyabandhu studied fine art at Goldsmiths, alongside Sarah Lucas and Damien Hirst. He was ordained into the Triratna Buddhist Order in 1990. He has written three books on Buddhism, in addition to two poetry pamphlets and three full collections: The Crumb Road, published by Bloodaxe in 2013 which was a PBS Recommendation, Yarn in 2015 and After Cézanne, an illustrated meditation on the life and work of the painter, in October 2019.

Julian Stannard is a Reader in English and Creative Writing at the University of Winchester. He writes for the Guardian, TLS, PN Review, Poetry London, The Poetry Review and Nuova Corrente (Italy). His most recent collections are Heat Wave (Salt,  2020) and Average is the New Fantastico  (Green Bottle Press, 2019),  a collaboration with the artist and novelist Roma Tearne.  He has written a study of Basil Bunting which was published by Liverpool University Press in 2014 and co-edited The Palm Beach Effect: Reflections on Michael Hofmann (CB  editions, 2013). Sottoripa: Genoese  Poems, a bilingual publication, was published by Canneto in 2018, and his film poem ‘Sottoripa’ that can be seen here

Harriet Tarlo is a poet and academic who teaches creative writing at Sheffield Hallam University. She is the editor of the anthology The Ground Aslant: Radical Landscape Poetry (Shearsman, 2011). She has collaborated with artists to work on exhibitions and artists’ books involving text and image, and since 2011, she has been working on place-based collaborative projects with the artist Judith Tucker. Her most recent poetry collection is Field, published by Shearsman in 2016.

Jane Yeh’s first collection of poems, Marabou (Carcanet, 2005), was shortlisted for the Whitbread, Forward, and Aldeburgh poetry prizes. She was named a Next Generation poet by the PBS for her second collection, The Ninjas (Carcanet, 2012). A Lecturer in Creative Writing at the Open University, she also writes on books, theatre, and fashion for such publications as The Poetry Review and The Village Voice. Her most recent collection, Discipline, was published in 2019.

Tamar Yoseloff’s sixth collection, The Black Place, was published by Seren in 2019. She’s also the author of Formerly, a chapbook incorporating photographs by Vici MacDonald (Hercules Editions, 2012) shortlisted for the Ted Hughes Award; two collaborative editions with artist Linda Karshan; and a book with artist Charlotte Harker. She’s a lecturer on the Poetry School / Newcastle University MA in Writing Poetry and teaches courses for galleries such as the Hayward and the RA.

Basil Beatie RA (born 1935, West Hartlepool) graduated from the Royal Academy schools in 1961 and was elected a member of the Royal Academy of Arts in 2006. Beattie lives and works in Mitcham, Surrey. His sixty year career has included solo shows at Tate Britain; Royal Academy of Arts; Middlesbrough Institute of Modern Art; Jerwood Gallery, Hastings; and IKON Gallery, Birmingham. He taught for many years, including at Goldsmiths College in the 1980’s and 90’s.

May Cornet (born 1975, London) –  the great-granddaughter of Jacob Epstein and granddaughter of Lucian Freud – lives and works in Suffolk. After graduating from Goldsmiths College in 1998 she was artist in residence at Walsall New Art Gallery, and subsequent solo shows include at Thomas Gibson Fine Art, London, Le Musee Moderne de St Etienne, France and North House Gallery, Manningtree, Essex.

Alison Gill (born 1966, UK) studied sculpture at Brighton University and the Royal College of Art. She lives and works in London. She has had four solo shows at Sabine Wachters Fine Arts in Belgium, Other solos shows include at CERN, France/Switzerland in conjunction with a residency in 2014, at Charlie Dutton Gallery, London and Taro Nasu Gallery, Tokyo.

Hew Locke (born 1959, Edinburgh) spent his formative years (1966–80) in Guyana before returning to the UK to complete an MA in sculpture at the Royal College of Art (1994). His comprehensive solo exhibition, ‘Here’s the Thing’, took place at the Ikon Gallery, Birmingham and is now touring the USA, where he has often shown. Aside from several solos with Hales Gallery, his London shows include at the National Portrait Gallery, Imperial War Museum, Tate Britain and V&A.

Juliette Mahieux Bartoli (born 1989, Italy) grew up between Paris, Washington DC, Geneva, and Rome, eventually settling in the UK.  She studied at the University of Cambridge and City & Guilds of London Art School. She has had solo shows in London and Berlin with Kristin Hjellegjerde Gallery and her work is part of the Benetton Imago Mundi exhibition, currently traveling internationally.

Mali Morris RA (born 1945, North Wales) and studied Fine Art at the University of Newcastle upon Tyne and the University of Reading, MFA (1968–1970). She was elected an RA in 2010. She has held some 40 solo shows worldwide, and has been included in numerous group shows, including at the Barbican, Hayward, Serpentine and Whitechapel galleries in London and the Museum of Wales, Cardiff, as well overseas.

Judith Tucker (born in 1960, Bangor) studied at the Ruskin School, University of Oxford and at the University of Leeds, where she is currently a Senior Lecturer.  She co-convenes the networks Land2 and Mapping Spectral Traces, and her exhibitions include at Southampton City Art Gallery, Royal West of England Academy, Regis Centre for Art Minneapolis, Arts and Geographies Exhibition, Lyon, and Armory Gallery, Blacksburg, Virginia, USA.

Michelle Williams Gamaker is an artist working in moving image and performance. She interrogates cinematic artifice, deploying characters as fictional activists to critique the imperialist storytelling in 20th-century British/Hollywood studio films. Her work screened at BFI FLARE LGBTQ+ Film Festival (2017), BFI’s LFF ‘Experimenta’ (2018) and is in the Arts Council Collection. She is joint-winner of Film London’s Jarman Award 2020, which toured to LUX Scotland, Nottingham Contemporary, g39, Spike Island, Towner Eastbourne, Whitechapel Gallery, The MAC and AEMI. She is the recipient of the Stuart Croft Moving Image Award 2020 and a Decolonising the Archive Research Residency 2021 (UAL Decolonising Arts Institute)

Virginia Verran (born 1961, Falmouth) studied at Winchester and Chelsea schools of art, and currently teaches at Falmouth College of Art, Chelsea and Turps. She was a Jerwood Drawing Prize winner in 2010, and has exhibited at the Francis Graham-Dixon Gallery, London, Newlyn Gallery, Henie-Onstad Kunstsenter, Oslo and Centre For Recent Drawing (C4RD), London. 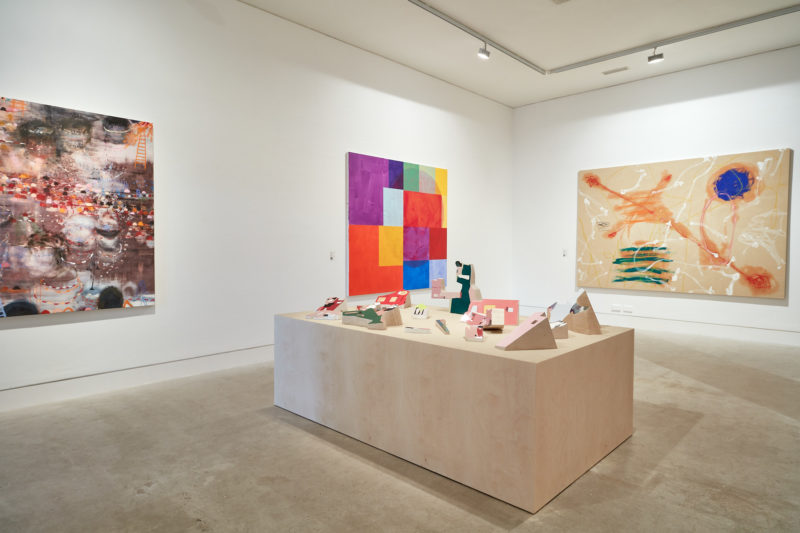 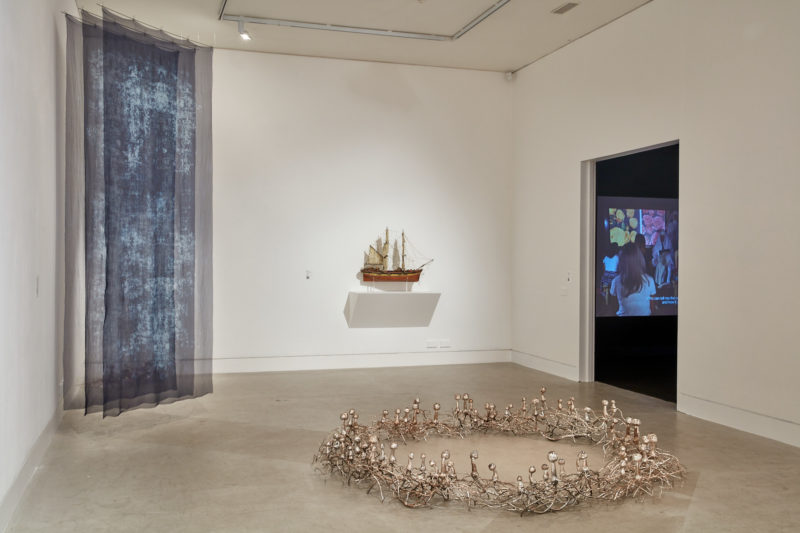 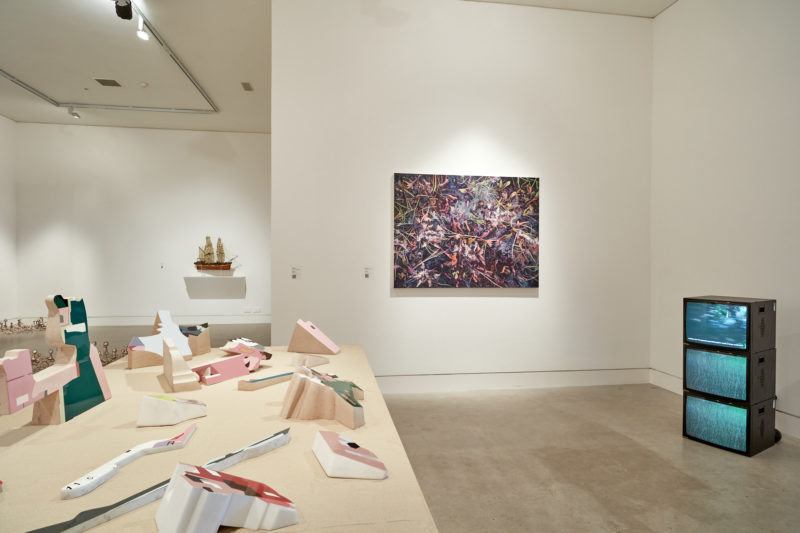 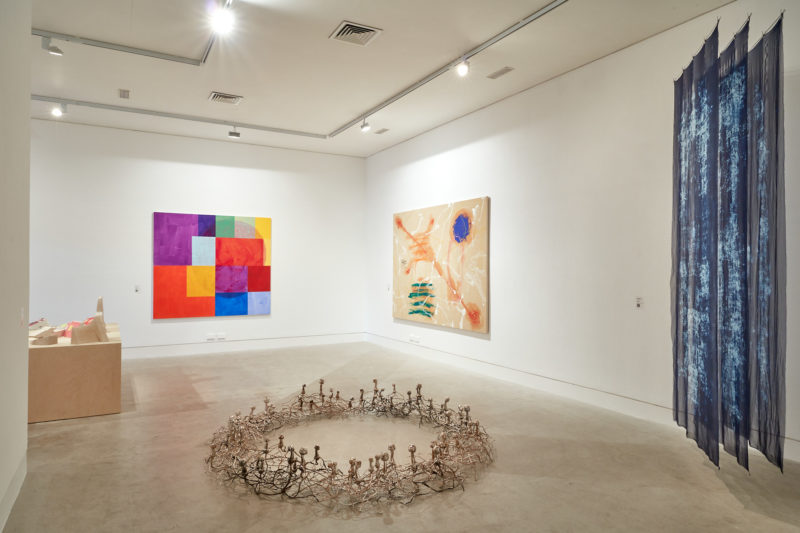 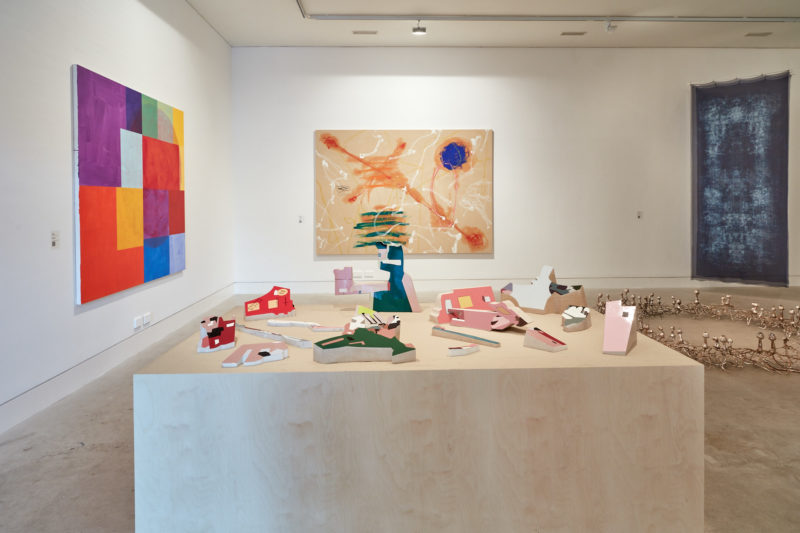 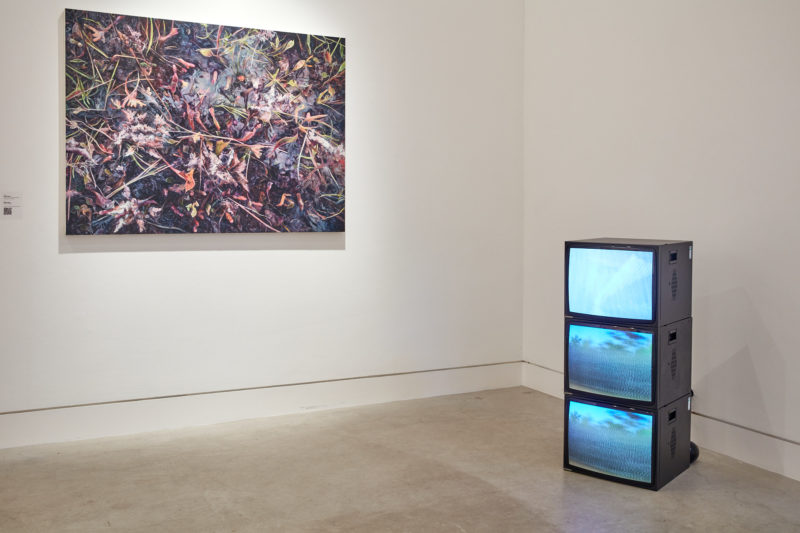 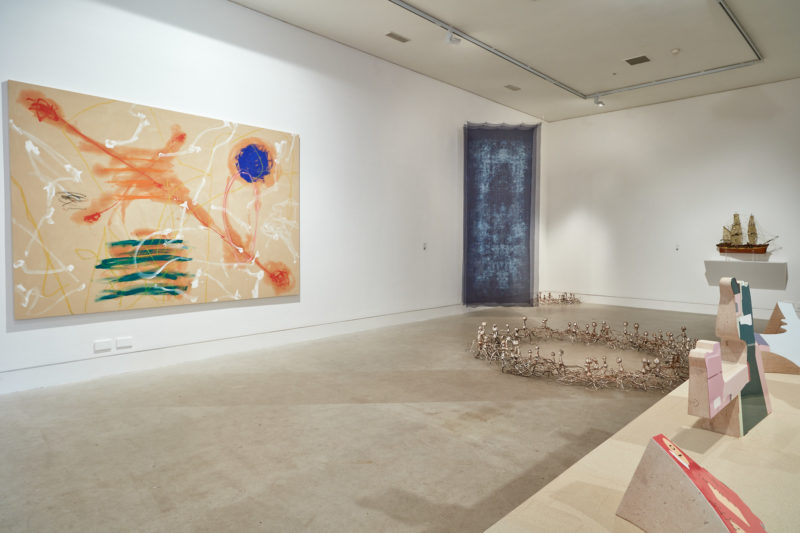 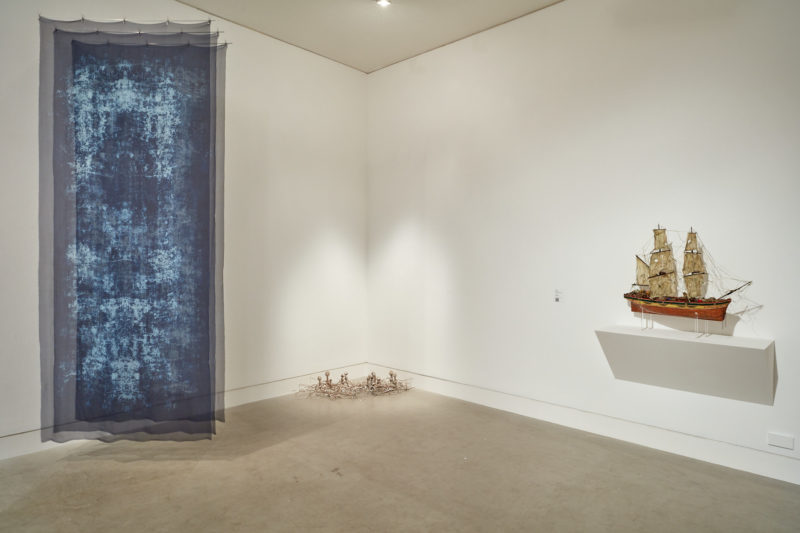 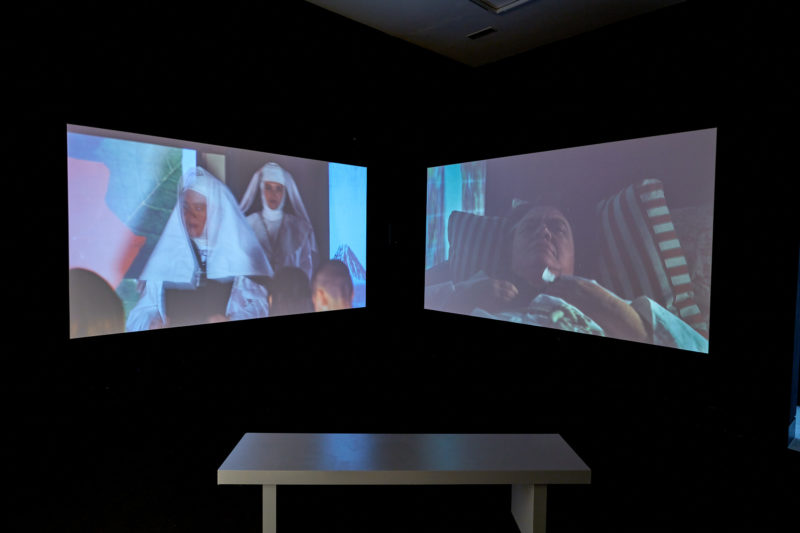 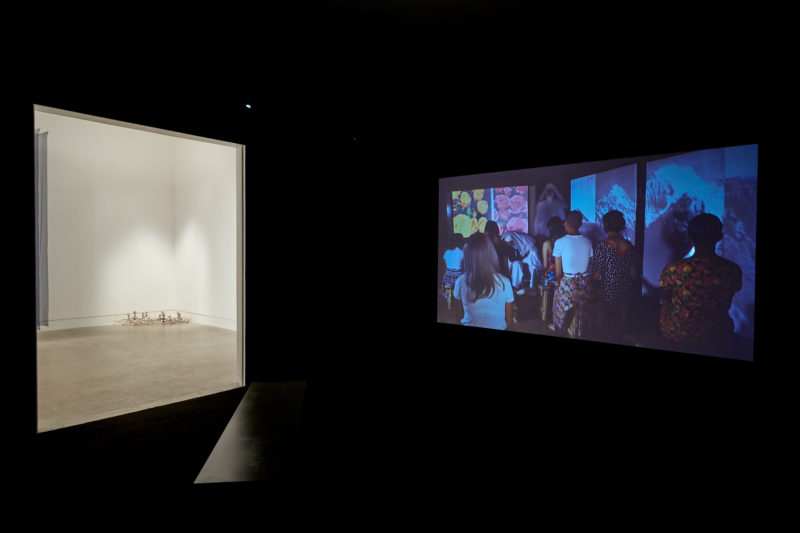 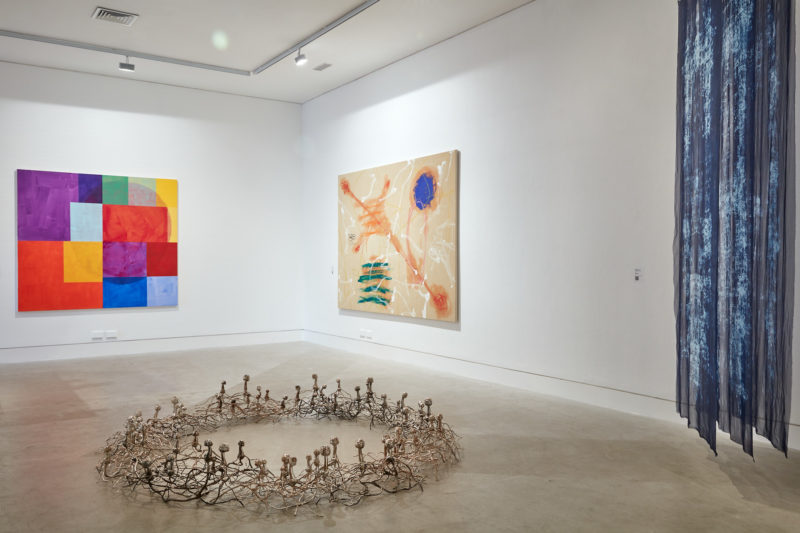