Phantoms of the Avant-Garde is the first in a series of monthly events (July to October 2015) exploring lines of connection and points of dialogue between the LUX archive and the Cranford collection. The first screening is presented in collaboration with CGP London at Dilston Grove. The series has been curated by Matt Carter (Distribution Manager, LUX) and Louise Chignac (Special Projects Manager, Cranford).

Taking Laure Prouvost’s Wantee, a work centred around her fictional grandfather and his relationship to the Surrealist artist Kurt Schwitters, as a starting point, the works in this screening draw upon avant-garde legacies within contemporary practice. Through explorations of the past, the artists in the programme deconstruct their own canonical heritage, creating new histories through the very apparatus they disassemble. Dislodging of time forges new associations and the tension between an inescapable past and the endless potential of the future, highlight an absurd futility inherent in artistic practice but also an unrelenting and admirable fervour.

Skaer’s treatment of the elderly Surrealist painter Leonora Carrington studies Carrington’s wrinkled hands and dry, witchy hair, her jars of paint pigment kept inside a glass cabinet and her cheap plastic clothes-pegs on a laundry line – never letting Carrington, who appears to be speaking throughout, be heard. At the end of the film Carrington holds up her finger in a gesture of imminent wisdom; Skaer cuts to black.

Skaer accompanied the film with the sculpture Leonora (The Tyrant) (2006), a table into which she inlaid the shape of claw-like hands in mother-of-pearl (recalling the film’s signature image of Carrington’s wizened hands). Like Skaer’s use of gold leaf in her drawings, Leonora’s opulent material and its title evoke violence and threat: the hard-edged, sinister beauty that Skaer also draws out in the lines of Carrington’s face and in her vainly kept long hair. (Frieze Magazine, Issue 111 Nov-Dec 2007).

Laure Prouvost created a dark muddy room at Grizedale Arts, which forms the setting for this video work. The room is conceived as the living room of Prouvost’s fictional grandfather. This invented relative is described as a conceptual artist and one of Kurt Schwitters’s close friends. Prouvost’s work draws upon the dual aspect of Schwitters’s work – his celebrated Merz works, as well as his conventional portraits and landscapes. The room also shares the features of a tea room, inspired by Schwitters’s companion’s nickname, Wantee, due to her habit of asking, ‘want tea?’

Prouvost combines language and images to construct invented storylines that seduce and disturb, whilst exploring the slippage between fiction and reality. In this new installation Prouvost investigates how an artist has little control over the way their work is perceived in years to come, and the way what is considered art changes over time. (Tate Britain).

The 16mm film entitled Lunch in Fur/Le Déjeuner en Fourrure (2008) revolves around a fictional encounter in an early 70s modernist glasshouse of three iconic female figures of the early avant-garde movement in their later years; the photographer Dora Maar, the artist Meret Oppenheim and the performer and political activist Josephine Baker. Maar and Oppenheim were friends and collaborators in the surrealist movement whilst Baker’s modern performances were fetishized within the register of colonial fantasy.

The title of the film refers to the name of Oppenheims fur-lined teacup object (1936), which was later titled Le Déjeuner en Fourrure by Surrealist leader André Breton and is probably the most notorious Surrealist object. Together with this fur-lined teacup the three protagonists are surrounded by other avant-garde objects, such as the Picasso’s portrait of Maar, a chessboard of surrealist forms, a reel-to-reel tape recorder and for example the indirect presence of the photographs of Man Ray, recognised in the performed poses of the actresses.

The spoken dialogue bends into the surreal referring to myths, the gaze and the nature of memory. In an enigmatic play, the absence of a direct interaction between the three women is replaced by their gestures and attitudes towards the objects, recollecting the Surrealist idea of extending dialogues with objects.

Phantom Avantgarde is made up of collage elements, photocopied and enlarged to life-sized scale from a selection of key films of the cinema of existentialism, as well as images of Parisian intellectuals of the mid 1960’s. Once removed from their historical cultural reference, Waller reconfigures the cut out figures as a parade of mummified bodies, narrated through subtitled text from Louis-Ferdinand Céline’s novel, Journey to the End of the Night.

Phantom Avantgarde is a development of Mark Aerial Waller’s ongoing interest in the historical positioning of culture; that mythologised archival data can coexist between the reconfigured present and its original home. The figures on parade are not purely reference points to their origins of creation, but become charged receptacles of culture, living again in a parallel situation, curated and directed in a new constellation.

By bringing the figures back into a three dimensional, material studio, the artist gives the frozen frames a second chance of performance. Using handheld camera movements to navigate their environment and the exact film stock of the original movies (Eastman 7222), Waller re-potentialises the characters, who seem somewhat curious of each other in their new awakening. As the film develops, the studio is put under armed siege from the bullets of Marcel Carné’s film that intercuts with the work, where broken glass and bullet riddled mirrors fracture and reflect [in a manner reminiscent of the libidinal paintings of Jacques Monory]. These already dead cut-outs are put in danger once again, prompting them to be elevated further into life.

Very much in line with his previous work, Robert’s L’Education Sentimentale is a series of collages inspired by 1970s conceptual Dutch artist Bas Jan Ader. “Bas Jan Ader disappeared at sea over 30 years ago. My new film acts as an intervention on his filmed performances. In five minutes I attempt to locate myself within his vocabulary, re-enacting gestures that I identify with, whether these gestures come from record covers, such as David Bowie’s ‘Heroes’ or ‘The Idiot’ by Iggy Pop or appropriations and transformations of Bas Jan Ader’s own work. My intention is to underline his importance as an influential figure in my work.” (Jimmy Robert).

The Tiger’s Mind is an abstract crime thriller set against the backdrop of a brutalist villa. Six characters, the set, the music, the foley, the special effects, the narrator and the author battle one another for control of the film as it unfolds on screen. The film explores the relationships between these characters as they emerge and unfold: grappling, wrestling, and dreaming with one another. The film’s production elements were produced employing the character-driven improvisational score The Tiger’s Mind, by Cornelius Cardew. 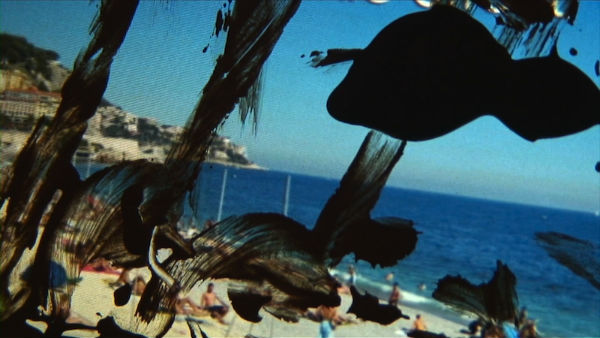