As part of our Black History Month celebrations and in solidarity with Southwark Stands Together, we are pleased to launch the second in our annual series of flag commissions for Southwark Park by artist Habib Hajallie, supported by Omni Colour.

Two flags created by the Kent-based artist titled Wampanoag Power and The British Dream draw on research undertaken during the artist’s residency at Southwark Park Galleries in August 2021 as part of the Mayflower 400 Project, which marked the 400th anniversary of the Mayflower ship’s journey from nearby Rotherhithe via Plymouth to North America. The project critically retraced the Mayflower story examining its current resonances by addressing the themes of tolerance, migration, enterprises and community.

Wampanoag Power is a self-portrait by Habib Hajallie, originally drawn during the artist’s residency at the gallery on a copy of John Bunyan’s The Pilgrim’s Progress (1736) during Hajallie’s residency at Southwark Park Galleries in summer 2021. For the drawing, Hajallie took the narrative of the pilgrims’ arrival and settlement from the UK to the United States. This journey is often retold omitting the enslavement and brutality inflicted upon the native Wampanoag population in Massachusetts. Through the lens of racial empowerment, Wampanoag Power was created as an artwork that looks to dispel the neatly repackaged revisionist history of this time.

There are clear parallels with the transatlantic slave trade, the pilgrim colonisers and slavers in the 17th century. Informed by his Sierra Leonean heritage and culture, the similarities in these histories enabled Hajallie to empathise with the atrocities inflicted upon the Wampanoag. The use of the self-portrait makes the artist himself the central subject, in order to bring the proximity of these issues to the forefront and into contemporary consciousness.

Using motifs inspired by traditional Wampanoag culture, specifically Massasoit (the leader of the Wampanoag at the time of the pilgrims’ arrival in 1620) this flag recognises the Native Americans that have had a significant part of their history mythologised to suit their oppressors.

Hajallie’s second flag, The British Dream draws on the notion of “the American dream”, a familiar trope in the Western world. For many immigrants, Great Britain is also representative of a land of true opportunity. This ballpoint pen portrait depicts the artist’s grandmother Huda, drawn on an 1866 geographical text, framed within an authentic Sierra Leonean fabric collage. Immigrating to England, from the tumultuous socio-political tensions of early civil war Sierra Leone in the mid-90s, provided her with immense hope, captured by the emotive expression of wonder shown in her Grandson’s portrait.

As a mixed raced Muslim woman moving to Great Britain at this time, Huda was unaware that she would largely be seen as an outsider. Unwithering in the face of adversity and prejudice, she would ultimately fulfil her dream of prospering in the United Kingdom. This work also pays homage to the strength of a family matriarch, who left her homeland to join her family in a country where they hoped to be afforded greater opportunities through perseverance, whilst maintaining pride in her identity.

Habib Hajallie is known for his fiercely detailed portrait drawings which aim to lift up those historically undermined by society and the mainstream media. His style of portraiture is directly inspired by his Sierra Leonean heritage and influenced by sketches from the high renaissance, using traditional draughtsmanship techniques. Often using himself or family members as subjects, he skillfully navigates the intersection of his upbringing in the West and his African culture and heritage. He has exhibited extensively in the UK and across the Atlantic in the US. The artist has received prestigious awards including the Under 30s Prize at The Drawing Society, United Kingdom (2019 and 2021), the ‘Best in Show Award’ at Embracing Our Differences, Florida, USA (2020) and The Signature Art Prize – drawing/printmaking (2020) He was shortlisted for the Trinity Buoy Wharf Drawing Prize 2021.

The Artist Flags are generously supported by Omni colour 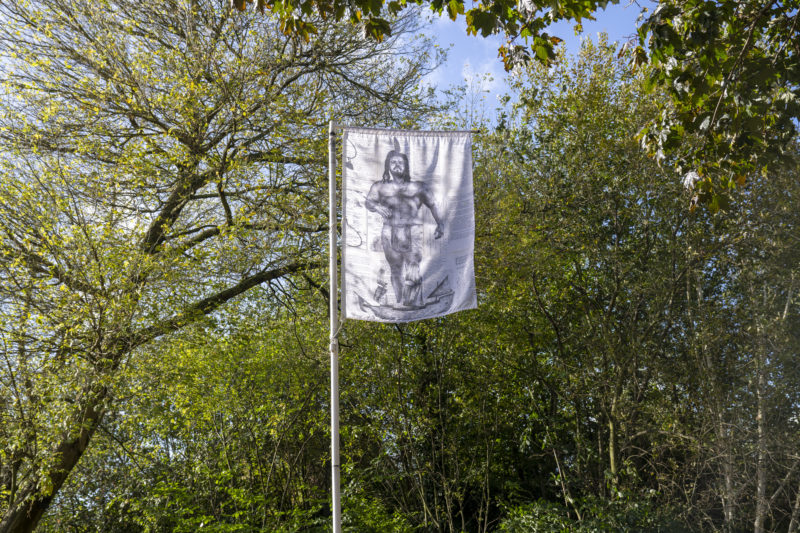 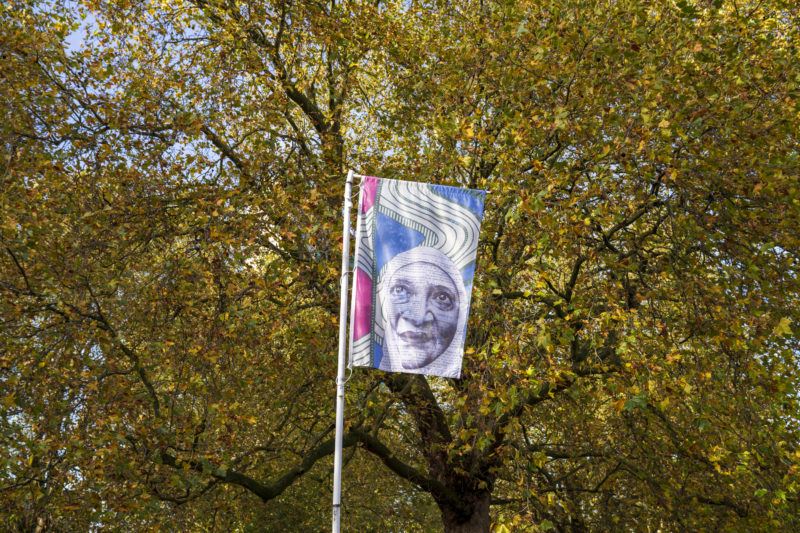